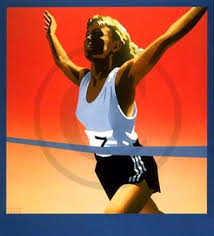 I believe that most people are capable of much more than they realize.  We limit our thinking because of what we’ve been told or read.  A few weeks ago I was jogging three to four miles approximately four times a week and wondered what a “realistic” jump in mileage would be, so I googled “training for a marathon” and the first site was “Hal Higdon’s Marathon Training Guide“.  He said the first week you could run three miles, three days in a row and then after a day of rest, run six miles for your long day of running.  I started following his schedule and was up to 7 miles the second week.  My knees were a little sore that day, but I’m getting stronger.  I even started taking vitamins that include Omega 3 for joints.  The longest I’ve ever jogged before that was five miles in the bayou of Louisiana, while in the Army, when I was 21.

My doggie loves me, because I take him to a nearby nature center and trail run with him.  I’m usually the only one there, so I let him run free!

I didn’t plan on entering a marathon, in fact, my timing was off, because you need to train for at least 4 1/2 months and all of the marathons would be finished by then.  I was telling my friend, Sherry, about training for the non-existent marathon and she suggested a half marathon.  So, that’s how it came to be.

6 thoughts on “Training for a Half Marathon”

Join 4,906 other subscribers
Your visits are my reward. I prefer not to accept awards...thank you for the thought!