Hello friends!  I was going to wait until after I returned from Africa to begin posting, because I knew there wouldn’t be much time, but I wanted to touch base with all of you!  Let me begin by saying…Africa is amazing!!  So much has happened in the 10 days I’ve been here, so I will give a quick summary.

My traveling companions are from all over the world.  Sixteen men and women..single and married…from Ireland, Australia, Germany, Canada, Hong Kong, S. Korea, Denmark and one man located within 45 minutes from where I live in Ohio!

I am currently in Swakamund, Namibia in a guest house within four blocks of the beach.  Until now, we’ve been camping and putting up our tents each day.  I am the only solo camper, but I’ve learned to put the tent up myself within 5-7 minutes. 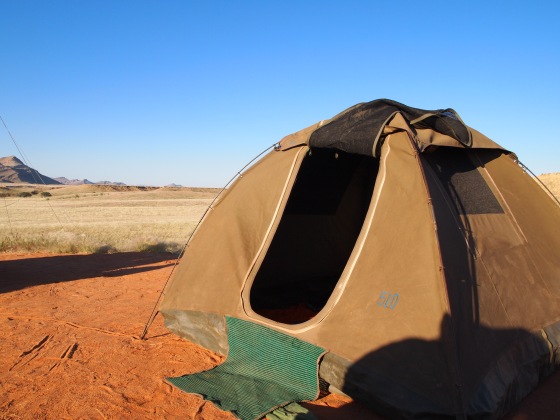 Home away from home

We’ve already had two mishaps with the overland truck.  The first morning as the three guides were preparing to load our luggage, someone drove by and tore the doors off of the truck in Cape Town.  We waited two hours for another vehicle to arrive.  The replacement isn’t quite as nice as the original, but we’re going with the flow.

A few days ago our truck broke down in the desert.  It took them almost an hour to fix it.  But…when you’re visiting spots like this….you embrace it!

We left our campsite the other morning at 5:00am to drive the 15 minutes to Dune 45, also known as “Big Daddy”.  I was too scared to hike to the top.  It is much higher than it looks!  Next, we drove a short distance to the Deadvlei Salt Pan in the desert.  As you can see, it’s amazing!!

I’ve seen all types of animals along the road while driving.  We’re heading towards Etosha National Park next.  My wifi and cell phone service is sporadic, so I’m not sure when I’ll post next.  As I said before, I’ll be posting some pre-prepared posts that don’t relate to Africa in between if there is no time to post!  Hope everyone is well!!

44 thoughts on “Greetings from Africa”

Join 4,818 other followers
Your visits are my reward. I prefer not to accept awards...thank you for the thought!