Since I’ve been back from Africa…a lot has been going on.  Some of it is personal and heavy-duty–so I can’t talk about it.  But most of it has been FUN!

This was my friend April’s (on the left) boat christening party.  She’s amazing!  She just finished 1st in her age group in a triathlon.

I really enjoyed this 4th of July pool party.  That’s me on the right with the hat on.  I didn’t know most of the people…but its good to get out and meet new friends! 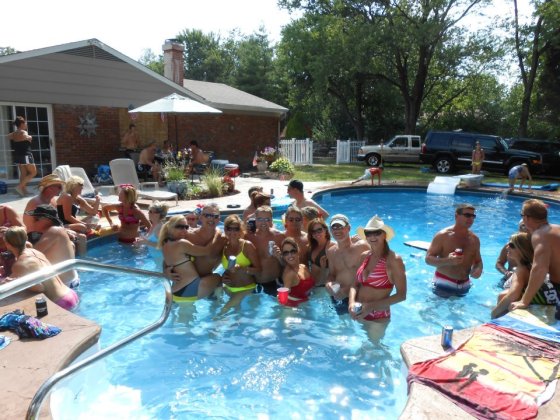 This was at an outdoor concert in a suburb of Cincinnati called “Blue Ash”.

The wine tasting meeup.com organization I belong to had an event at the Art Museum…

Its been really hot here, so I’ve been to the neighbor’s pool, my girlfriend’s pool, and to the beach at Eastfork Lake.  Lots of other fun events like a Reds Game, bicycling 20 miles on the Loveland Bike Trail, jogging almost every day, hiking, and trying new recipes that I find on Pinterest.

Like, Spinach Orzo, Shrimp Tacos, and fresh peaches, lemonade and vodka in a blender!

Tonight after jogging or hiking (can’t decide which one to do) I’ll try a Blackberry Margarita…yum yum!!

Hope you’re having a fantastic summer (or whatever season it is where you are)!!

After some ibuprofen, a hot shower, and a nap, I’m beginning to feel better since jogging my half marathon today!  Normally, I don’t get sore after a long jog (the longest before this was 10 miles last weekend), but since it was only 35 degrees this morning, I’m assuming that is why it affected me differently… anyways…it was an experience and I’m glad I did it.

It’s kind of like childbirth, I remember I was wishing it was over a number of times, but looking back, it seemed to go rather quickly.  I finished in 2 hrs. 15 minutes, which is the time I predicted, since I normally jog 10 minute miles.

For breakfast, I had whole grain cereal with banana and almond milk, and water.  We drove an hour and 10 minutes from a suburb of Cincinnati to Clayton for the race.  There was one in town last weekend, but I was out-of-town and there is one this coming weekend, but I’ll be out-of-town again.

This is me pre-race… 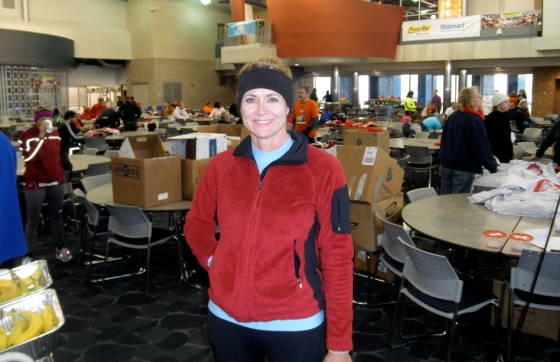 My husband took photos of me and although he has many talents/strengths, photography is not one of them.  These are the best of the many he took…most of them are blurry.  But, I’m not complaining, I was thankful he came to cheer me on!  I’m fourth from the left in the photo below.  I think there were about 200 people total.  I’ll get the results sometime in the next couple of days.

We started about a minute later.

The terrain was beautiful, rolling roads through rural Ohio with pretty trees and farms along the way.  When I would get caught up in my head thinking… analyzing…etc., I would look around and be in the moment, thinking I love the feel of the sun warming me (a bit) and thankful that I am able to run (so many people can’t because of being out of shape, past injuries, or worse)!   I bought some goo to eat once (at mile 10) for energy.  It tastes like chocolate icing.  Some people don’t like to take it because of the texture, but it did seem to give me a boost. 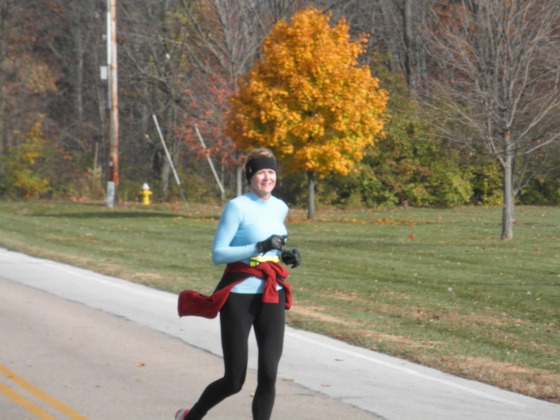 The girl next to me in the photo below was beside me for the last 1/2 mile and I told her we could help each other go faster.  Anyway, she started to pass me right before the finish line, so I amped it up…that’s why we’re laughing!

Right afterward, I could barely breathe or walk.  I’m glad I didn’t stop running the entire time, except for 30 seconds to eat the goo, or I might not have been able to start again!

After stretching some, below is my celebratory photo!  Tonight, we’re going to a Halloween party, so a few drinks should loosen me up a bit more!  Happy Halloween to everyone and to all a GOOD NIGHT!! 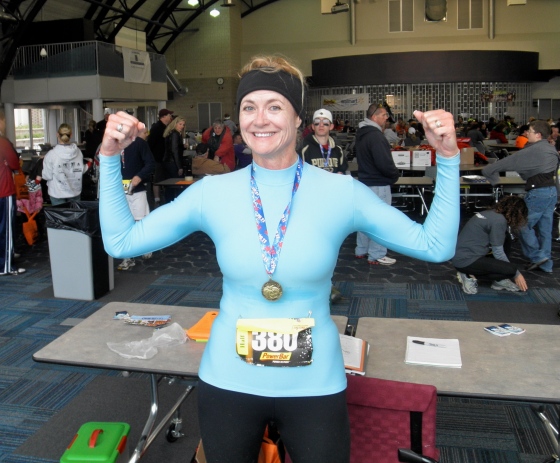