When my mother was living with me last year, I composed a five-page typewritten mini “autobiography” for her. Following the ideas from a website called “Living Legacies”, I questioned her extensively and discovered many things about her that I previously wasn’t aware of. 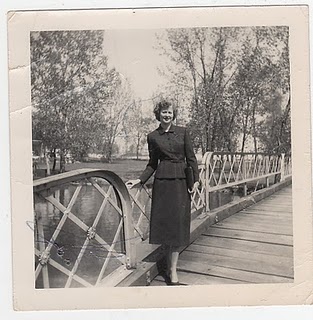 When she was born in the early 1930’s, there was a mid-wife to herald her birth. She was one of eleven children, born into poverty. Her parents did share-cropping for a few years and life was difficult in the country.

There was no electricity or running water. Coal oil lamps were used and there was an outhouse. They didn’t own a car, so walking was a necessity. A horse and wagon was used to transport their possessions when they moved. The boys were the horsepower to pull the plow for farming!

Rainwater was collected to wash hair and bath time came around once a week. Her mother would cut everyone’s hair when necessary. Although mom was a tall and skinny girl, she chopped wood, carried water from a spring, helped with doing laundry on a washboard, and would knock hens off of their nests, so she could gather their eggs. One of her sisters milked the cows. They had pigs and usually a few dogs and cats.

The boys would sleep together in one bed and the girls in another bed. Mom remembers having to pick dandelions for soup, because they had very little food. There were the cherished memories of her mother making cornbread, fried chicken, milk gravy, chicken &amp; dumplings, bacon, eggs, and homemade blackberry pies.

Mother wore hand-me-down clothing and Grandma would make broom-stick skirts for the girls. When the holidays came, there were peppermint sticks for Christmas and Turkey was a treat for Thanksgiving.  She has fond memories of playing hide-n-seek, swimming in the creek, playing with dolls, and her brothers making homemade toys out of sticks.  They picked berries and shelled walnuts.

Gathered together, sitting on the floor, the children enjoyed listening to radio broadcasts of “The Shadow”, “Inner Sanctum” and the “Squeaky Door”.

She left home when she was 17 years old and lived with one of her older sisters for a year, before moving to the YWCA. She married my father in her early 20’s.

Life was difficult for Mom as she was raising her three children, because Dad changed jobs frequently and the lack of money was a constant. She felt frustrated because she couldn’t provide much for her children in the way of clothes or any activities that required money. There were no family vacations, except for camping.

Dad and Mom owned a Deli for a while, and Mother worked behind the counter, while Dad grew his beard long and traveled through Amish villages, purchasing meats and cheeses from them.

Mother’s next job was laundering napkins at a restaurant/nightclub. I had left home at this point and was in the military.

There was much turmoil through the years in my family and they ultimately divorced in 1981 and Mother moved to a small apartment. She met her next husband shortly thereafter and remarried in 1983.

For the past 20 years she was an Apartment Complex Manager and her husband was the Maintenance Man there. She has fond memories of her years with him, before he died in 2001. They went fishing, had picnics and grilled out, went to dinner with her sisters, had friends that lived in the apartment complex and enjoyed many good times with them.

Beginning around 1995, Mother had a ghost that would harass her every night in the apartment that she and her husband lived in, until she moved out in 2008. She had a team of paranormal investigators spend the night once and they recorded activity.

In November, 2008, Mother was informed that she has a giant aneurysm at the base of her skull and they didn’t want to operate on it. She was in a nursing home and not doing well, so I quit my job and she moved in to my home so that I could take care of her. She improved rapidly and a year later she moved into a senior citizen apartment nearby.

Just recently she fell and broke both of her arms…so she went back to a nursing home for a month before returning home.

The following are some of mother’s thoughts, beliefs and opinions:

• She believes in God, heaven and hell.

• If she could have three wishes they would be to own a small compact house, that my older brother would stop drinking and that her aneurysm would disappear.

• Her advice to young people is: To live life without drinking too much and without anger.

• Her advice to married people is: To love one another like you would love yourself.

• She is sometimes afraid of the thought of death and other times, not.

• Her greatest challenge in life has been her oldest son, because he has been mean and angry with her for most of his life.

• The most generous thing she’s ever done is: sacrificing many of her wants/needs/money in trying to change her son into a loving son.

• The meaning of life to her is: It is what you make it. God gave us life to see what kind of individuals we would be on earth.

Join 4,906 other subscribers
Your visits are my reward. I prefer not to accept awards...thank you for the thought!