One of the best ways to explore any city’s architecture is by walking through its streets and Edinburgh has such a diverse and interesting mix of architecture, you’ll forget your feet are beginning to hurt!

I’m definitely not an expert on architecture, but I know what pleases my eye and camera.  The following are some photos from Old and New Town Edinburgh, which were made a UNESCO World Heritage site in 1996.

This cute little house is situated in Princes Street Gardens, which lies between the Old and New Towns of Edinburgh.  A lovely place to take a stroll!

I encountered this colorful scene while walking downhill from our visit to Edinburgh Castle.

There is nothing particularly “special” about this shot, but the blue definitely pops and I find it visually appealing.

Row of buildings in Old Town Edinburgh as seen from the divide between the Old and New Towns.

Located near the bottom of The Royal Mile, this darling building is actually a Public School. 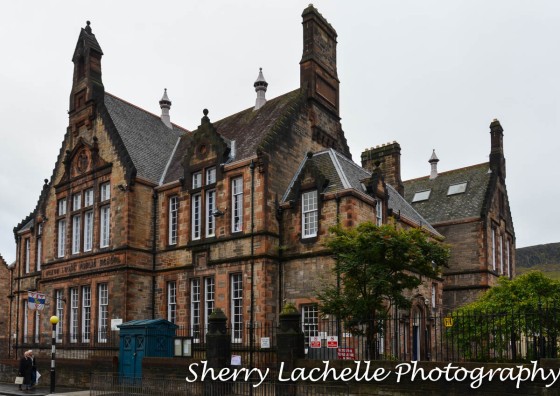 Opened in 2004, Edinburgh’s Parliament Building has created controversy with the locals due to its ultra-modern design.

The festival wheel is located in New Town Edinburgh and in the distance standing 200 feet high, the Scott Monument is a Victorian Gothic monument to Scottish author Sir Walter Scott. It is the largest monument to a writer in the world.

My friend and I did a bit of shopping in New Town on Princes Street.  It was nice to escape the rain also!

This is Cockburn Street intersecting with The Royal Mile…

The town of Pitlochry, Scotland has some beautiful architecture.

I hope you enjoyed viewing some of Scotland’s magnificent architecture!