According to the UNESCO World Heritage site, the Fortress of Suomenlinna was built in the second half of the 18th century by Sweden on a group of islands located at the entrance of Helsinki’s harbour and consists of 200 buildings, 6 km of defensive walls, and stretches over six separate islands.

The purpose of the fortress was originally to defend the Kingdom of Sweden against the Russian Empire and to serve as a fortified army base. Sandbanks, barracks and various other buildings were added during the 19th-century Russian period.

After Finland gained independence in 1917, the fortress was renamed Suomenlinna (or Fortress of Finland) and served as a garrison and a harbour. The military role of the fortress declined after World War II, and in 1973 the area was converted for civilian purposes. Since then, buildings have been renovated to serve as apartments as well as workspaces, to house private and public services, and for cultural purposes.

Today, Suomenlinna is one of the most popular tourist attractions in Finland and constitutes a district of Helsinki with 850 inhabitants.

Jing, Paul, and I boarded the 30 minute ferry to the Fortress. 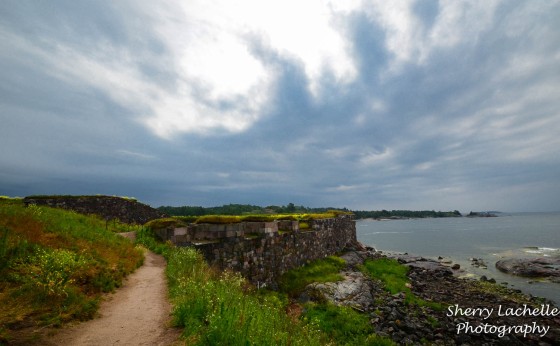 It was a rainy day which makes it difficult to take photographs and hold an umbrella, but I managed.  Here’s Jing looking oh so colorful again!

The ducks didn’t mind the rain…

Despite the weather, we enjoyed exploring the Fortress!

8 thoughts on “Fortress of Suomenlinna”