After coming out from the Subway, I started walking towards Times Square and didn’t really know what to expect.  I knew there would be lots of lights, people and action.  I thought it was one area…like a square…but as I approached the area…I realized it encompassed a few blocks.

Although I’ve been to Las Vegas…initially I was like…”Wow”!  So many things to look at!

I always like to photograph policemen…especially if they’re on a horse! 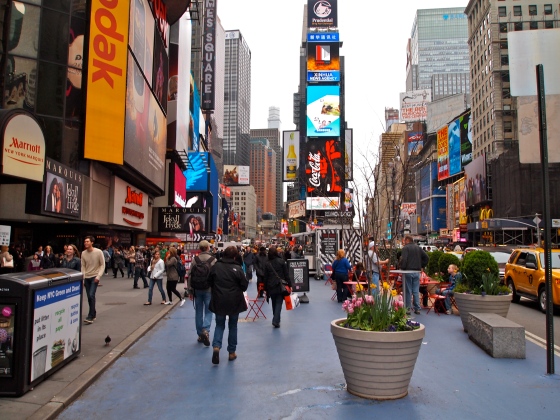 I noticed people staring up at a screen, so when I looked up…I saw myself…in the lower left hand corner with the blue shirt and black jacket…so I took a photo and realized they put these little blurbs up…I was saying “The monokinis are coming”.  I Googled it since I didn’t know what that was…they are women’s one-piece swimwear that have cut-outs on the sides.

After exploring the area, I walked down to the subway and saw this beautiful wall mural and the musician was really good!

Next I was headed to meet Molly–a fellow travel blogger whom I’d never met before!