I took photographs of my friends Todd and Laurie’s blended family a few days ago and referred to a written list of some of the poses and ideas I wanted to try, that I had taken with me.  It was a lot of fun.  For this one, I laid on the ground with my legs between Laurie’s legs and had all eleven of them look down at me.  You need to have your flash on for this one.  It would be even better if there were fewer people. 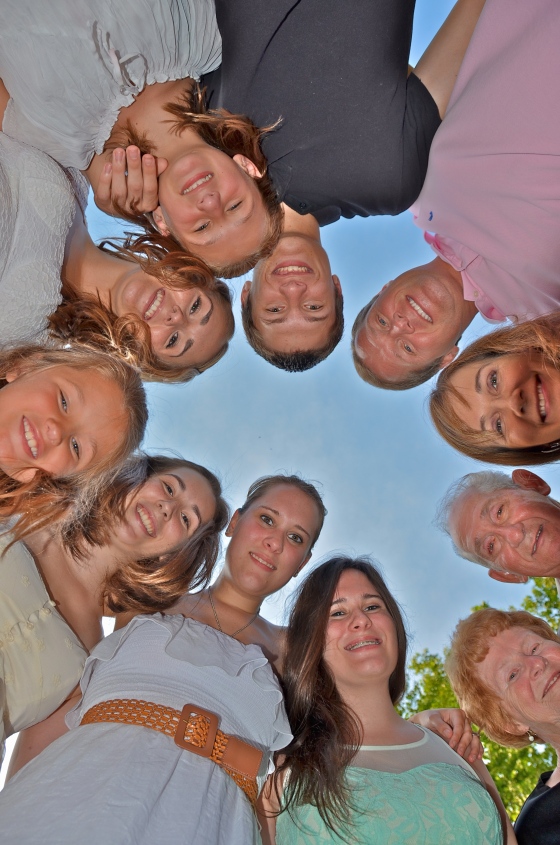 This was my first “official” family photo shoot and I learned a few things.  We decided to meet at Nisbet Park in Loveland.  This was the first time in a long while that all of them were together, so it was difficult to get or keep their attention while I was directing them on the poses.  I am rather soft-spoken, so I’ll need to learn to raise my voice.  I know background matters, but I was trying to keep them engaged and moving from pose to pose, so I didn’t notice this pole near the son.

I’ve seen this pose in graduation shots where they stand behind a tree and peek out.  This wasn’t on my list, but one of the girls mentioned it…and I think it turned out cute.

The little one is so cute!

For this photograph, I told them to “strike a pose”.

Originally, I was going to have them all touch fingers in the star shape, but it was difficult to see the little girl, so I had the idea to make her be part of the star.

This was the first pose we did…

And this was the last one.  I probably took two or three shots of each pose, and we were finished in under an hour.

Which one or two are your favorite?