The next stop on my three-week tour of Peru through GAP Adventures in 2009 was Lake Titicaca.  It is the highest lake in the world–somewhere around 12,500 ft.–and is stunningly gorgeous!  It’s the largest lake in South America. 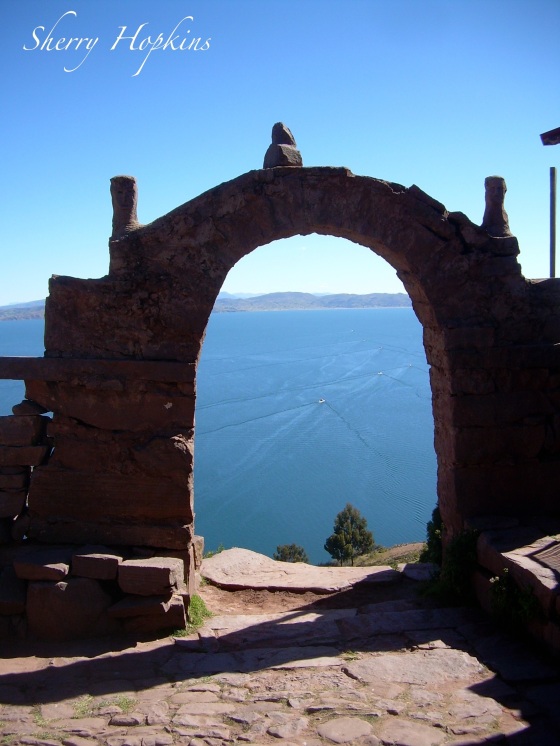 I was paired up with Kerstin, the German girl with our group, and a girl from New York.  The teenage daughter of the family we would be staying with met us at the boat and we followed her for about a half mile to her family’s home.  Luckily, Kerstin could speak Spanish, so although the native language of the people was Quechua (which resembles Spanish), the teenage daughter could also speak Spanish and could translate for her family.  Here is the Mother cooking in the kitchen.  (so don’t ever complain about having to cook again!)  She was an excellent cook…dinner was scrumptious and the pancakes for breakfast were so good! 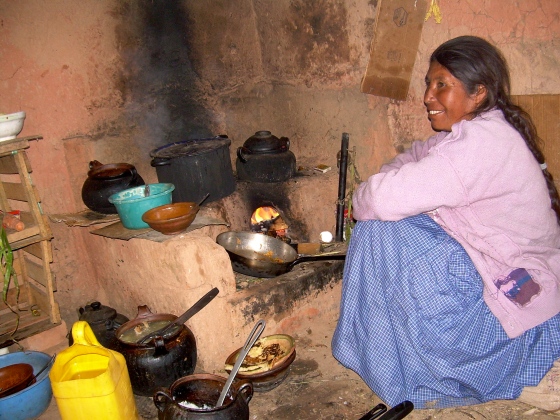 This baby lamb was in their backyard, so the three of us corralled him (no easy task) and we got to cuddle with him!

Here’s a photo of the Dad!

We had brought a variety of gifts for the family…mostly food items and they seemed pleased with the bounty!

It was great fun blowing bubbles with the kids at the neighborhood coffee shop!  Look at the little boy in front of me…he’s pursing his lips like he’s blowing bubbles too!

Somehow, we organized a game of soccer against five local, who didn’t speak English.  I have never played soccer, but volunteered to be the goalie.  Of the eleven of us on the tour, I was one of the oldest and don’t forget, we were playing at high elevation!  But…we won!!  I was determined to not allow even one of their forcefully kicked balls to cross that line!  One of the balls hit my hand so hard, I was jumping up and down from the stinging pain and I still have a small knot (a souvenir) in the middle of my hand, to remind me of our victory!

As you can see, I lifted up one of the Peruvian soccer players for our Victory photo…we couldn’t communicate through words…but he was obviously tickled with my show of “female strength”.  I’ll bet this was the first time he’d ever been picked up by a “girl”!

Stay tuned for…life on the water with the Uros people!

27 thoughts on “Picking Up Men at Lake Titicaca”